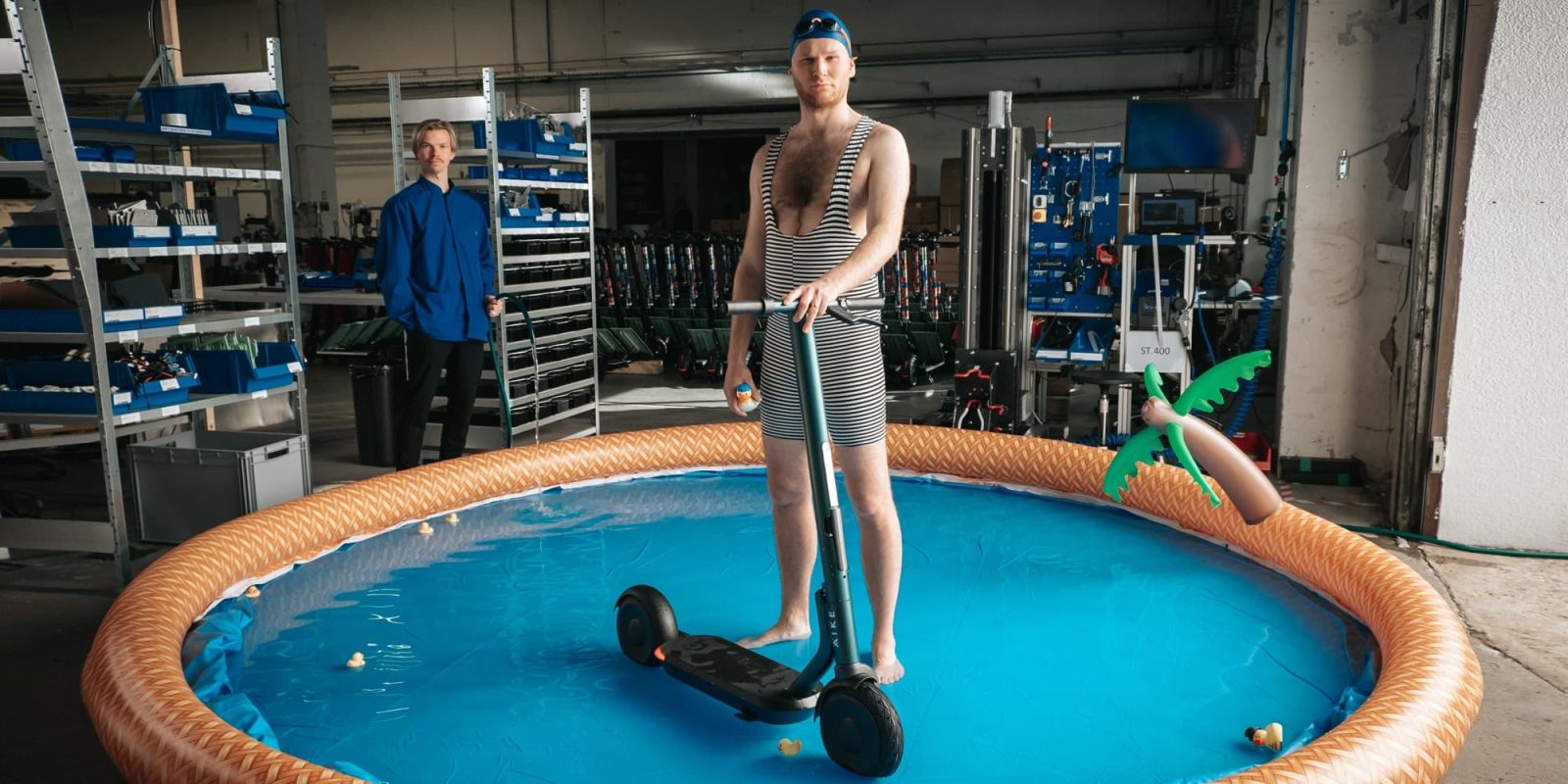 I recently had the chance to see and test the new Äike T in its native European capital of Tallin, Estonia. Having ridden the scooter, met the team that designed it and toured the facility where it is built, I can tell you that this is one of the best designed electric scooters I’ve laid eyes on, and here’s why.

In 2014, a group of Estonian engineering students chased and ultimately found success designing and building electric race cars in international competitions. As fun as that was, they knew they’d never really accomplish anything larger by simply driving fast cars in circles. The key to turning their electric vehicle development knowledge into something that could benefit real people was to focus on smaller, lighter and more accessible vehicles, which led them from high speed electric race cars to utilitarian scooters that could move people around cities.

They soon founded Comodule as an Internet of Things (IoT) company, now the leading provider of connectivity services for light electric vehicles. Many of those shared electric scooters on your street corner likely use Comodule’s tech for their connectivity and app.

Kristjan Maruste, the CEO of Comodule, decided to found Äike to build better scooters, do it in a sustainable way, and use local European production that relies mostly on local materials.

He had already begun with Comodule’s own in-house designed and built electric scooters that are used by several sharing companies – around 3,500 of those scooters are currently in use. They are so well built that in over two years, only seven scooters have had to be written off for being unable to continue service. Many other scooter companies write off that many units on a normal day, let alone over several years.

While the team originally began with a focus on shared scooters, Äike launched its first consumer scooter model last year. That scooter offered a 10-year frame warranty and some of the best connectivity in the industry, honed over the course of Comodule’s own long history of in-house software and hardware development.

The Äike T electric scooter, which was just unveiled this morning, has taken all of that experience and combined it with in-depth customer interviews and product design workshops to further refine the product into what they believe is the best electric scooter in the world. After having gotten a sneak peak at the scooter to test ride it ahead of the launch, I can see why the Äike team is so boastful. It really is a kickass scooter.

Check out the team’s humorous launch video below to see the scooter’s highlights. Stick around until the end of the video (it’s under two minutes long) to see Kristjan put the waterproofness of the Äike T to a serious test.

The Äike T is built to last

Where can I even begin? This thing is built like a tank, and nearly all of its parts are made in Europe. Despite the elegant-looking single side-supported wheels, the Äike T is rated for riders weighing up to 150 kg (330 lb). I could stack five cases of beer on the spacious deck, sit on those to ride it and still be under the weight limit.

That would probably work pretty well, too. The deck is designed to be wide enough to accomodate a rider with feet side-by-side, though I’m not sure why anyone would want to ride that way. Perhaps it’s because I’m used to riding electric skateboards, but having a forward and rearward point of contact on a deck just seems more stable to me so I can shift my weight while braking or accelerating. But if you like to ride your scooter like a bathroom scale, you can do it on the Äike T.

The scooter is also designed to handle pot holes and rough road conditions that could shake other scooters to bits. The 11-inch wheels with automotive-style tubeless pneumatic tires and rims help to upgrade that durability and longevity. The hub motor is rated at 350W nominal, though likely puts out even higher peak power figures.

Äike takes pride in its local manufacturing, as the company explained:

Äike’s high-quality EU-based manufacturing and interchangeable parts make everything super sturdy to begin with, yet also effortless to repair. As all our manufacturing is based in Europe, we are not majorly affected by global supply chain shortages and work avidly to prolong the vehicle’s lifecycle as much as possible. At the heart of the robustness is our pride and joy – our sturdy aluminum & steel frame.

The company was still awaiting waterproof certification laboratory results on their early scooters when I visited the factory, but they are expecting to receive IPX5 rating – that would mean riding can be done in rain or shine (though you should always use caution when riding in wet conditions). The Äike is also tested to withstand operating in temperatures from -17 to 35 ºC (1 to 95 ºF).

There’s a removable battery locked inside the deck that features a 583 Wh capacity and is rated for up to 40 km (25 miles) of range. There’s also a second smaller built-in battery to run the on-board devices like GPS theft tracking (more on that in a moment) when the battery is removed for charging.

And speaking of charging, there’s a USB-C port for charging the battery! This is a huge deal and something I’ve begged manufacturers to implement on e-bikes and e-scooters.

A second charging port for a higher power accessory charger will also offer faster charging times of around four hours, but anyone with a USB-C laptop charger of up to 100W will be able to dump power into their Äike battery in 6-8 hours without needing any other proprietary chargers or connectors. For an overnight charge or during the day at work, that’s likely plenty fast.

To keep it protected from sticky fingers, the scooter has IoT-enabled GPS theft protection that kicks in to lock the scooter and sound a “loud and proud” alarm if the scooter is moved after being parked.

Owners will also be notified on their phone that the scooter has been messed with. If it is still dragged away by a thief, the GPS can be used to recover the scooter.

Kristjan explained to me that the team has a “more than 100% recovery rate” on stolen vehicles so far.

Not only have they recovered all of their stolen vehicles, but when they’ve led police to the site of a thief’s stash, more stolen electric vehicles from other brands are usually discovered and recovered on site as well.

The same app that offers GPS tracking has a number of user-adjustable features as well. The speed can be user controlled (but will usually be limited to a max of 25 km/h in the EU).

Kristjan says that the scooter is actually capable of higher speeds based on its hardware, and I’m guessing that if they enter the US market, they’ll offer a higher speed setting.

Riders can also control features like the regenerative braking intensity, which is used to recharge the battery and add more support to the sealed drum brakes. Unlike disc brakes that fade when wet, the drum brakes could theoretically work just as well even submerged under water.

Äike also says that the Äike T has the shortest braking distance on the market. Other app features include directly connecting with customer support and accessing over-the-air (OTA) updates for the scooter and app.

For a display, the scooter comes with a minimal color-based display that offers a quick glance to gather information like speed and battery charge.

Riders that like more detailed info can use the app-based display to give a full range of ride data and statistics. The user’s phone can be used with a quick disconnect device that mounts it on top of the handlebar stem.

While the scooter does weigh a hefty 19 kg (41.8 lb), it folds nicely to make it easy to toss in a car trunk or to slide under a desk at work. The scooter is a bit heavy, but it also carries its weight low and thus it felt much lighter during my test riding.

Picking it up reveals the full weight, though, so this isn’t a scooter that you’ll want to carry around all day. But then again, who carries a scooter that far anyways? Carrying up a flight of stairs or two are doable as long as you’re relatively fit.

Starting today, the Äike T will be available for pre-order with a €69 deposit. Final prices start from €999 (approximately US $1,025).

Having spent a day checking out the scooter and Äike’s facilities as well as talking with the team, it’s apparent how proud everyone is of the company and products they have built.

Äike is a true passion project of mine as I feel we are filling a huge gap in the micro mobility market. After 7 years in the industry, I find it crazy how the e-bike boom in Europe has brought us to around 5 million e-bikes sold per year with more than 50% made in Europe, whereas with over a million e-scooters being bought annually, virtually no one manufactures in Europe. This has left e-scooters in the background as the vast majority of them are not sustainable, comfortable or safe at all.

Äike is here to change that. There obviously is a demand, and we are here to meet that with a sustainable, durable, inclusive, IoT-connected, safe and genuinely best version of what they are looking for. We’re currently still in our launch phase, but we are very well positioned to grow fast as we control the full process in-house from design to production to delivery. Most of our supply chain comes from within 2h of our factory. We even make our own electronics and assemble our own batteries.