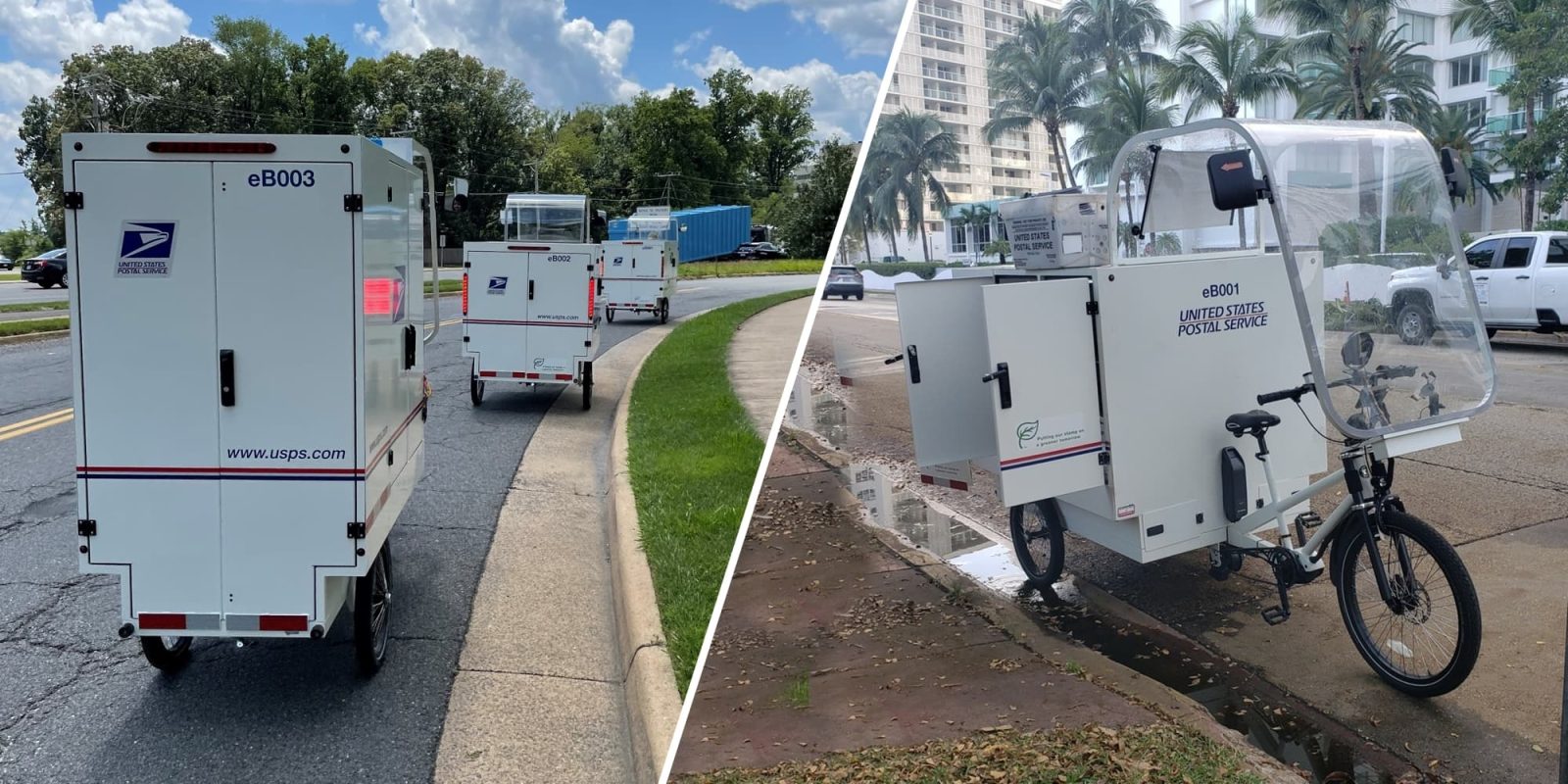 I recently wrote an opinion piece about how the United States Postal Service (USPS) could look to solve its gas-guzzler truck problem by following Europe’s example of delivering mail with smaller electric cargo bikes. As it turns out, the postal service has already been testing this out, and the little electric mail bikes look pretty snazzy too.

Not only are they designed to carry heavy cargo loads, but they’re also built in the US by Montana-based Coaster Cycles.

The electric mail bikes are built on the Freighter AW platform, which can be modified for various types of commercial e-cargo bike applications.

Technically it’s an electric cargo tricycle, but it almost looks more like a cargo van than a bike.

The giant rear cargo box provides 72 cubic feet (over 2,000 liters) of space for mail, and the bike can hold up to 400 lb. (181 kg) of cargo. Hydraulic disc brakes help bring all of that weight to a stop quickly and safely.

Powering the bike is Bosch’s Cargo Line e-bike drive system, which supplies the rear wheels with 85 Nm of torque. The drive system is paired with a 500 Wh battery to power the mid-drive motor, though multiple batteries can likely be swapped in to extend the range. It’s not like the bike lacks space to carry a spare battery or two.

The mid-drive motor runs through a sophisticated automatic transmission based on an Enviolo CVT, meaning mail carriers can spend less time worrying about shifting and more time looking for house numbers and watching the road.

Smaller diameter rear wheels help keep the cargo box lower to the ground, while rear view mirrors help the rider see over the back of the cargo box.

The bike’s cockpit includes a backup camera to make the bike easier to handle when reversing in tight spaces.

While most e-bikes have excellent rear visibility, I can see how a backup camera would come in handy on this particular model.

So far, the USPS e-bikes seem to be working out nicely. Christopher Jackson, the director of city delivery, explained in The Postal Record:

While there are still many things to consider and evaluate with these new e-bikes, I am hopeful that the Postal Service will continue exploring eco-friendly options for city delivery. I enjoy hearing feedback from the carriers who are participating in the tests. Thank you to the Florida bicycle carriers for welcoming NALC representatives and providing valuable insight, as well as for their dedication every day as they pedal many miles through their communities delivering the mail. As always, my heartfelt thanks goes out to all city carriers, as you continue to provide excellent service to the American people despite the many challenges.

The United States Postal Service is currently dealing with the fallout from backlash to its new gas-guzzler mail truck plans.

The USPS initially announced that it would be purchasing up to 165,000 mostly gas-powered Next Generation Delivery Vehicles (NGDVs) from Oshkosh Defense Corp.

The original plan was for 10% of those vehicles to be electric, though the USPS then increased that percentage to 20% for their initial order of 50,000 vehicles. The gas-powered NGDVs will get as low as 8.6 miles per gallon (approximately 27.5L/100km) during operation.

However, several lawsuits have recently been filed against the USPS regarding the high percentage of gas-guzzling vehicles in the order.

The lawsuits filed today rehash many of the recent arguments against this decision, primarily focusing on the USPS’ failure to do timely environmental assessments. They argue that not only was the initial environmental assessment undertaken after the contract was announced, but that the assessment was deficient in considering air quality and climate impacts of the plan and did not seriously consider other alternatives to the gas guzzlers the USPS decided on.

But USPS’s environmental assessment has been panned as insufficient not only by all the groups filing lawsuits today, but also the White House and EPA, which sent letters criticizing the plan (which also conflicts with President Biden’s order to convert the entire federal vehicle fleet to electric). Even the USPS watchdog group, the Office of the Inspector General, stated that the agency would benefit from adopting more electric vehicles than their current plan.