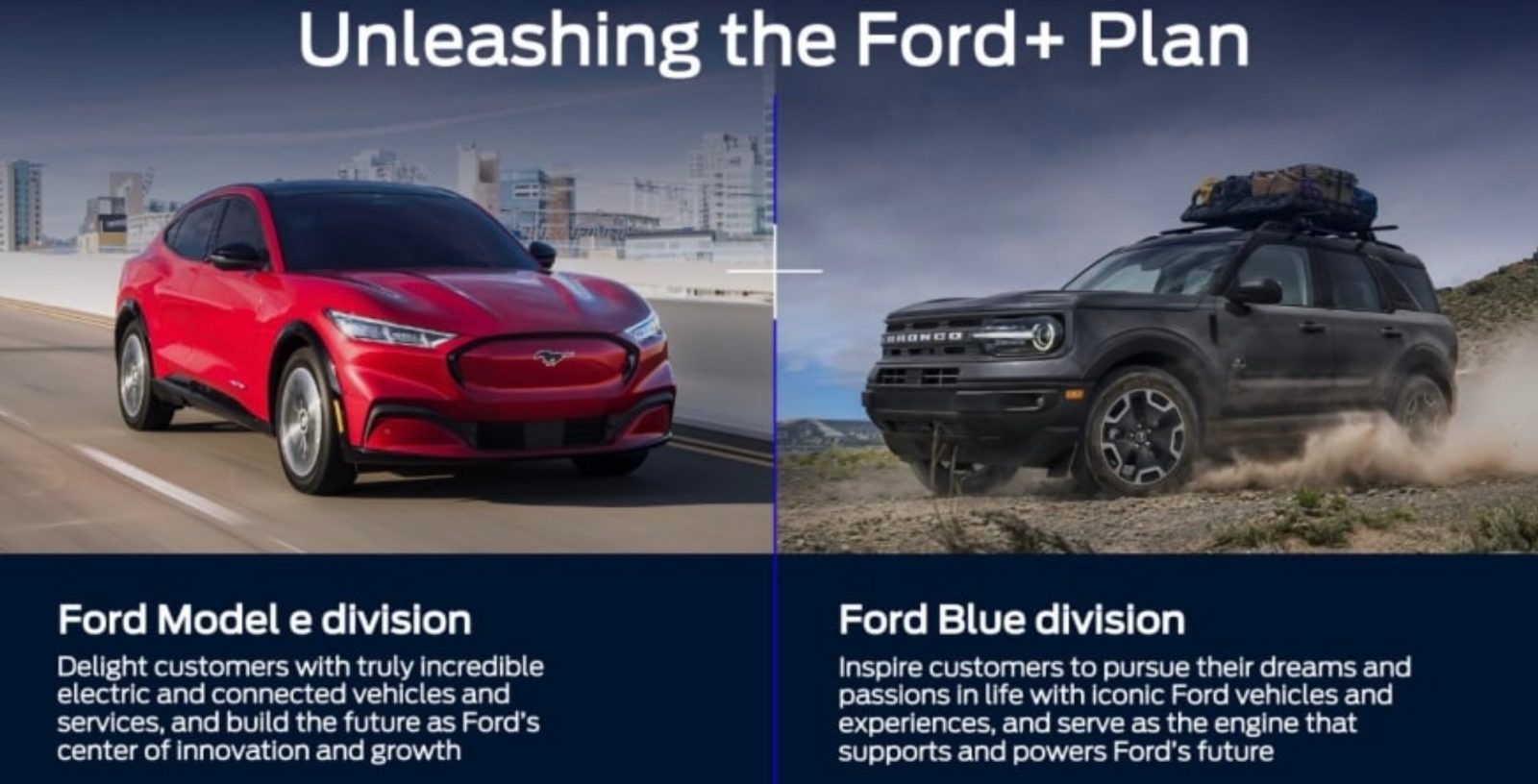 The move had been rumored for a few weeks, but it wasn’t clear what form exactly it would take. Initially rumors said that Ford was going to spin off either its EV or ICE business.

Now Ford confirmed that it’s operating the two business units, now Ford Model e division and Ford Blue division, within the company in order to have each unit operate as distinct businesses.

Here are the main points of the new plan as described by Ford in a new press release:

In short, Ford remains one company, but the two divisions are going to be able to operate separately within that company and share resources when it makes sense.

He commented on today’s announcement:

“We have made tremendous progress in a short period of time. We have launched a series of hit products globally and demand for our new EVs like F-150 Lightning and Mustang Mach-E is off the charts. But our ambition with Ford+ is to become a truly great, world-changing company again, and that requires focus. We are going all in, creating separate but complementary businesses that give us start-up speed and unbridled innovation in Ford Model e together with Ford Blue’s industrial know-how, volume and iconic brands like Bronco, that start-ups can only dream about.”

Ford announced several leadership changes along with the reorganization, which is expected to result in an additional $10 to $20 billion investment over the next 10 years.

Field commented on the announcement:

“Designing truly incredible electric and software-driven vehicles – with experiences customers can’t even imagine yet – requires a clean-sheet approach. We are creating an organization that benefits from all of Ford’s know-how and capabilities, but that can move with speed and unconstrained ambition to create revolutionary new products.”

Kumar Galhotra, the head of Ford North America, has been made president of Ford Blue, the legacy ICE division that will be wound down, however slowly.

This is Ford trying to reorganize its business as a legacy automaker dragging a giant internal combustion business into a future that is now undeniably going to be all-electric, and soon.

It’s probably the smartest way to do it – letting your growing electric business operate independently of your dying ICE business.

It’s likely going to allow Ford’s EV business to move faster, and hopefully a lot faster, because I still don’t like what I am hearing from them.

The automaker says that it plans to produce “more than 2 million EVs” in 2026, which is great progress, but it also says that it “expects EVs to represent half of global volume by 2030.” (which is an improvement of 40% which CEO Jim Farley said last time we heard from him.

In my opinion, if you expect any significant part of the population to want to buy a vehicle that is not 100% electric in 2030, you are making a grave mistake.

I think Ford will adjust this expectation over the next few years, but will it be fast enough to act on it is the big question. Perhaps adjusting its EV expectations up every few months is the new strategy to keep people buying a stranded assets.