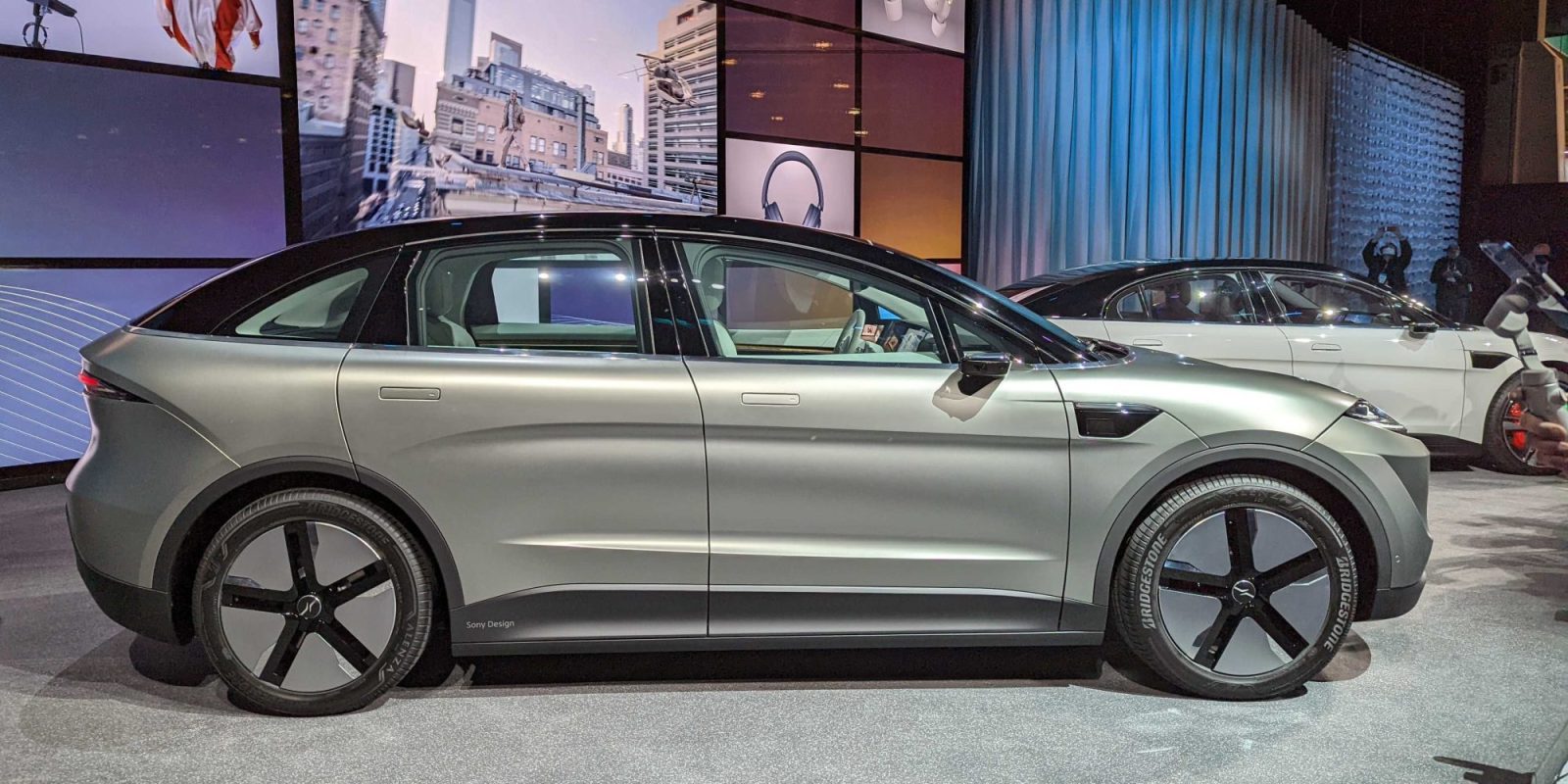 Sony brought another surprise to CES this year, revealing an SUV version of their VISION-S concept EV, which they showed off at CES 2020, and announcing the formation of “Sony Mobility, Inc.,” a new company to focus on mobility and EV efforts.

Even better, Sony explicitly stated that they are “exploring a commercial launch” of their VISION-S concepts, making this project seem more real than ever.

The presentation was rather short-lived, with only about four to five minutes spent discussing the car and Sony’s mobility efforts, right at the tail end of their press conference.

At the end, they drove both cars up on stage for a side-by-side, offering a comparison between the two.

The two are obviously related, with almost identical design language. The SUV is just a little bit larger, with a higher roof in the rear, but otherwise, the cars look very similar – almost to the point where, at first glance, you might chalk up the differences to mere camera perspective.

Really the only main difference we see is in the wheels, with the SUV having aerodynamic wheel covers and the sedan opting for more traditional-looking open-spoke rims.

There’s not much new for us to tell you about these concepts – Sony didn’t their time talking about specs, and the presentation was short anyway. Most of it focused on Sony’s experience with media and interfaces, and otherwise we’re left with the same specs as were announced originally – 400kW (536hp) dual-motor all-wheel-drive, 0-100km/h (0-62mph) in 4.8 seconds, and a top speed of 240km/h (149mph). We still have no information on availability, price, or battery size.

Inside, Sony retains the same interior they originally showed off at CES two years ago, with a massive wide screen across the dashboard and additional screens on the backs of the front seats. As a company with lots of experience with consumer electronics and media devices, expect plenty of access to music, movies, and games in the car’s infotainment system – along with 3D sound through individual seat speakers.

Of course, no concept car would be complete without autonomous drive sensors, and Sony’s concept includes 40 sensors split between cameras, radar, ultrasonic, and lidar for autonomous driving and parking tasks.

Sony’s new company, Sony Mobility Inc., will officially be formed this spring. In the press conference, Sony referred generally to “mobility” rather than specifically to electric cars, stating that “we believe Sony is well positioned to redefine mobility.”

This could mean that they intend to look into other aspects of mobility – micromobility, ride-share vehicles, a CarPlay analog of their own to sell to other automakers – rather than just focusing on an electric car. But electric cars tend to get more eyeballs than those other efforts, so it’s natural to include them in a publicity event.

But this announcement may not just be to attract eyeballs – Sony did say they are “exploring a commercial launch” of these vehicles. It remains to be seen how serious that exploration is, and we’ll surely find out more about it this spring when Sony’s new mobility company is officially launched.

We’ve now been hearing about this car for two full years, so Sony seems to be sticking to it. While we don’t hear much about it during these years, the fact that they have shown it at three consecutive CES events (with last year including actual public road driving footage), are creating a whole new company around it, and now have a second variant of the vehicle does suggest that they could mean business.

It may still end up just being a test bed for future infotainment efforts by Sony, but as we move toward a future where EV production becomes more commoditized (Sony partnered with Bosch for the VISION-S) and where cars become more software-driven, there is a reasonable case to be made for Sony entering the space. Sony has surely had that thought themselves, to the point where they are serious enough to set up a whole new company to be ready for that future.

And as we’ve said before – there’s nothing unreasonable about the specs of the VISION-S, nothing that seems “too concept-y” and unlikely to make it to production (except the digital side mirrors, but every pre-production car has those until the regulators tell them to put physical mirrors on it). It all seems pretty much what you’d expect out of a nice electric vehicle, rather than an overzealous fantasy.

Oddly enough, Sony’s addition of a second model to their concept line – both of which have working physical prototypes, not just renders – makes Sony seem almost as serious as actual Japanese automakers when it comes to EV ambitions.

The entire country seems to be dragging their feet on EVs, and most Japanese automakers continue to make anti-EV statements quite regularly. Mazda and Honda each have one battery electric car for sale to the public right now, and Toyota and Subaru have one coming soon. Nissan is ahead of the Japanese curve, with one on the road and the Ariya coming soon. Beyond that, we’ve mostly just seen renders.

So if Sony follows through on this, could they catch up and become a real player in the Japanese car industry? We put little faith in the ability of the big automakers to turn their ship around (except Nissan, perhaps), especially considering how hostile they continue to be to EVs. Sony, if they took this seriously, could snatch a good portion of the Japanese car market for themselves as the future comes around, which it will, whether Toyota wants it to or not.

What do you think about Sony’s VISION-S project? Does it look appealing, do you think they will – or should – go through with it? Let us know in the comments.