Apollo Pro review: Testing a 2,000W and 38 MPH electric scooter (and loving it!) 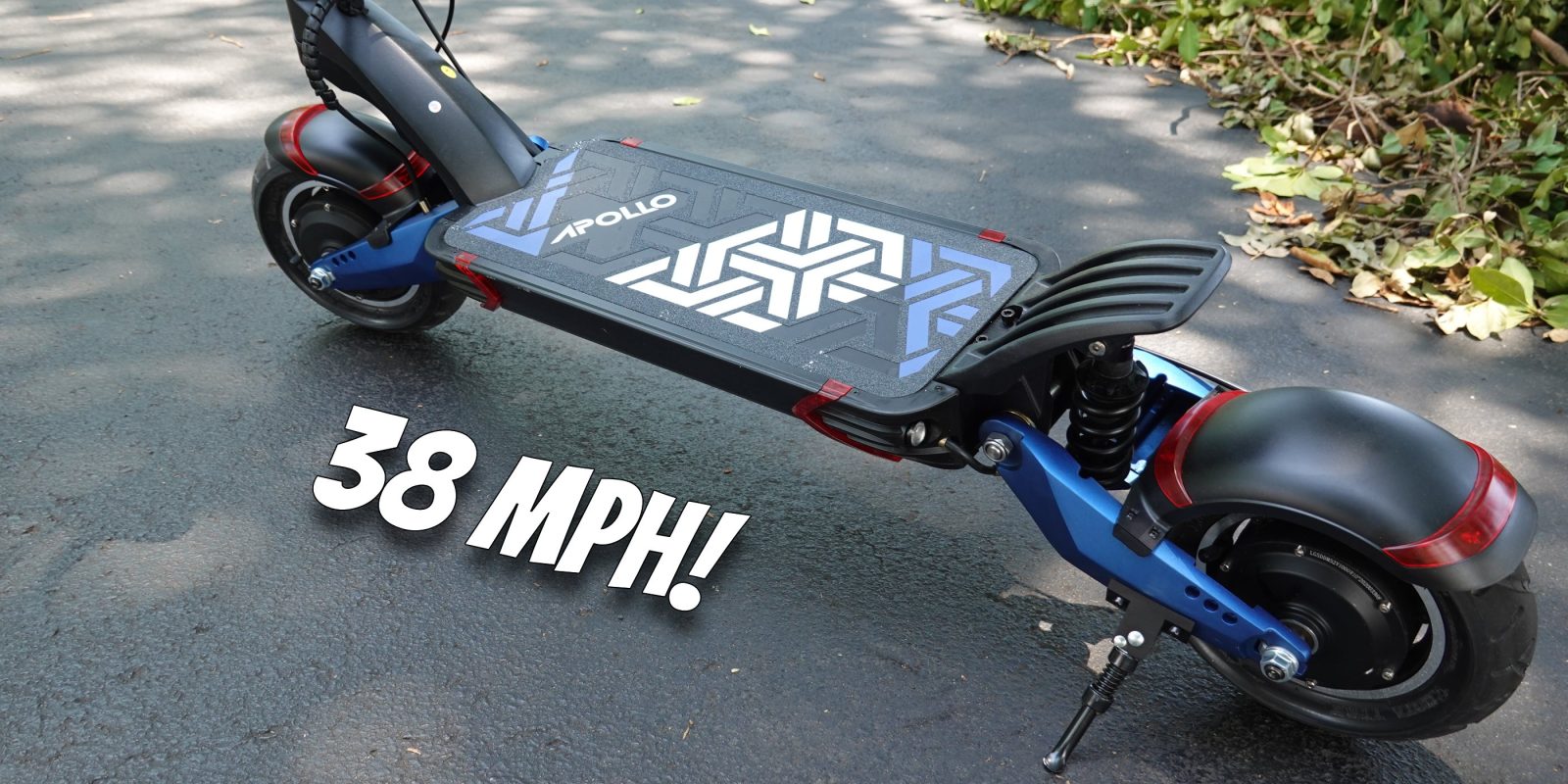 High-performance scooters like the Apollo Pro take many of the advantages of generic electric scooters, then combine them with more power and higher quality parts to open the door to countless more adventures.

With dual high power motors, a huge battery, and full suspension for leaving manicured roads in your wake, the Apollo Pro has just about everything you need to get a serious rush (or a sensible commute).

First of all, I should point out that there are a few different versions of the Apollo Pro electric scooter. While they have similar structures, their main differences are their power levels and brakes.

I tested the mid-level version with a 52V battery and hydraulic disc brakes, but I’ll mention the others as well so you get an idea of just how ludicrous these things get (hint hint).

Check out my video review of this scooter below. Then keep reading for all of the details!

Apollo Pro: Why so much power?

The first thing to know about the Apollo Pro is that it is a very powerful scooter. The dual 1,000W continuous motors are rated for 1,200W of peak power, so you’ll feel 2.4kW of power each time you pull the throttle, at least when you’re in full power and dual motor mode.

Of course, you can easily limit the power and speed, though in all fairness I usually ride around in full power mode and simply use the throttle as my power regulator. But in wet conditions or when letting someone try your scooter, the ability to put the Apollo Pro in single motor mode or Eco mode is a nice addition.

So why would anyone want so much power and speed? The simple answer is because it makes the scooter so much more useful. It’s not just about being fun (which it is), but it’s also a safety addition, in my opinion. I know that sounds counterintuitive, but consider this: Would you rather be stuck on the side of the road getting constantly passed by cars, or would you rather be moving at the speed of cars, not getting passed but rather moving at the speed of traffic.

As a commuter, that second option is much more appealing to me.

The suspension design on the Apollo Pro is a big part of what makes the scooter safer and helps it offer more utility. The dual swingarm suspension makes me feel more like I’m on an electric mountain bike than an electric scooter.

Whether I’m riding over speed bumps and potholes, or heading off-road to hit roots and rocks, that long-travel suspension is nicely tuned and actually helps you feel more stable. And more stability means more safety.

The scooter also sits up high and has plenty of ground clearance, meaning you can take it slow over tricky obstacles like curbs or branches, knowing you aren’t going to bottom out your deck halfway over the obstacle.

Of course I’ve ridden plenty of fast electric scooters and full suspension electric scooters before. But what sets the Apollo Pro apart (and largely Apollo as a company) is the quality they put into these scooters.

So many scooters look alike that it can be hard to differentiate them sometimes. But the devil is in the details. And Apollo understands the details.

The Apollo Pro has excellent build quality, high-end lithium-ion battery cells from LG, high-performance hydraulic disc brakes for safe and quick stops, and feels as solid as it looks.

And for added peace of mind, Apollo backs their scooters with up to 24 months of warranty coverage. They couldn’t do that if the scooters didn’t last, so it’s just one more indication of the kind of quality we’re talking about here.

The Apollo Pro: So close to perfect

As much as I love the Apollo Pro, there are two areas where I can see room for small improvements.

The first area that can be improved is the fender set, which can sometimes rub or click when bottoming out the suspension. It’s not a frequent occurrence, but I did try testing some pretty rough terrain and thus ran into it a few times. And to be fair, there’s only so much you can do about fender movement on a full suspension scooter when hitting such rough terrain. There’s a reason most mountain bikes don’t have fenders, for example.

The second area is lighting. The current head and tail lights on the Apollo Pro are fine, but that’s it. They’re just fine. Everything else is so top-notch on the scooter that the “just fine” lights kind of stick out, which is especially true after testing out the gigantic light show found on Apollo’s slightly smaller scooter, the Apollo Explore.

The stock lights are probably fine for most riders, but I would recommend picking up Apollo’s optional high power lights as an add-on, since the scooter could do with a bit more visibility at night. And luckily for you, if you use our coupon code ELECTREK, you can get $100 in free accessories, which means you can pick up that high power light and still have change leftover for a few other accessories.

The fact that I had to get so nitpicky to find any issues with the scooter should pretty much show you how well made and high-performance it is.

The Apollo Pro is fast, torquey, comfortable and most importantly FUN!

And I wasn’t even on the most powerful option! I can’t even imagine what their 60V Ludicrous model must feel like. For me, the standard 52V option with hydraulic brakes felt great and proved itself as an excellent e-scooter for both commuters and adventurers.

And the peace of mind of working with a reputable company with long warranties and great service is an excellent cherry on top of an already awesome electric scooter.