Tesla released a ‘dyno mode’ and you should NOT use it (seriously, really) 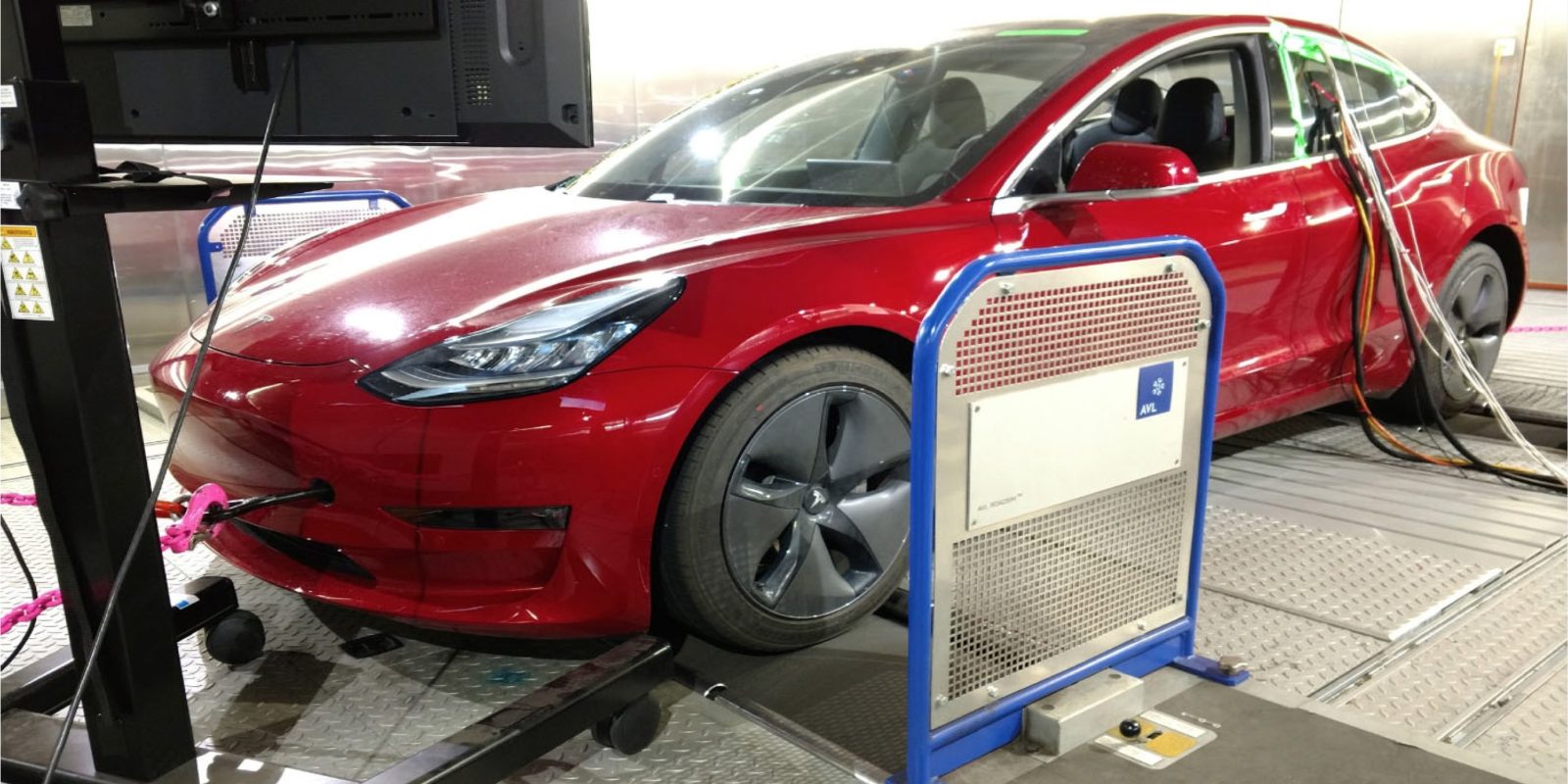 Over the last few days, there have been a lot of reports of Tesla owners activating “dyno mode,” a mode that disables safety systems for the purpose of testing the car on a dynamometer.

Some videos and comments have surfaced of owners irresponsibly using this mode on public roads which endangers public safety.  Do not do this.  This article will be an attempt to explain the relevant safety features of your Tesla, why they’re there, and why you shouldn’t turn them off by activating dyno mode.

A dynamometer (or “dyno”) is a device used for testing a car’s power output.  There are various types, but all of them generally work by providing a way for the car to send power to the drive wheels without actually moving the vehicle, and then the dyno records the power output of the car.

Dynos are used by car companies and enthusiasts to test power output, by aftermarket customizers to test the effectiveness of their modifications, and by regulatory agencies to measure efficiency.

Tesla’s dyno mode was first documented in an EPA filing last October.  The filing also included several photos of the car on a dynamometer for testing purposes, and data for the EPA to establish the car’s efficiency.

Now, word has gotten out about how to activate this mode, and Electrek is here to remind you not to use it on public roads.  Seriously.  It is dangerous, you have a high likelihood of crashing your car and endangering yourself and others.  At the very least causing significant damage to your vehicle which will likely take a long time to repair.  So just don’t activate it.

Dyno mode works by disabling many of your car’s safety systems including traction control, automatic emergency braking and stability control. These safety systems exist to make your car’s handling more predictable, particularly in situations where you would otherwise lose control.

Traction control works by automatically cutting power to the drive wheels in the event of loss of traction, allowing the wheels to regain traction which then helps to stop your car from spinning out of control.  It’s particularly helpful in icy conditions.  Tesla’s “slip start” feature allows for a partial disabling of this system which is useful when your wheels are stuck in snow or sand.

This system will also cut regenerative braking if wheel slip is detected.  If you’ve ever hit a bump or wet spot while under regen, you might have felt the car “surge” forward, which can take drivers by surprise.  In this instance, the car isn’t actually surging forward, it’s just an apparent decrease in acceleration, which gets interpreted as a surge by the brain.

This is actually a safety feature because traction control works by reducing torque to slipping wheels.  Regenerative braking is negative torque (torque in the opposite direction of travel), so it’s safer to turn it off momentarily to stop a skid.  This is somewhat analogous to how anti-lock brakes work (but anti-lock brakes are not disabled by dyno mode).

Automatic emergency braking automatically applies the brakes if the car detects an impending collision, a slow-moving or stationary object in front of the car which the car is certain to crash into.  It is meant to reduce the severity of accidents (and occasionally avoid them completely, but should not be relied on for this).

Stability control selectively applies brakes to individual wheels based on which wheel is slipping.  If the car detects that you are understeering or oversteering, it can apply brakes specifically to the correct wheels in order to bring the car back under control.

Every new car on the road these days is required to have stability control.  This rule has resulted in a drastic reduction in automotive fatalities saving thousands of lives per year.

Experienced professional drivers have techniques to help mitigate the loss of traction and bring a car back into control, but these take a lot of practice before they become instinct.  These techniques actually often involve overcoming your natural instincts.  To avoid snap oversteer, for example, one solution is to keep accelerating while countersteering (“turning into” the skid), which runs counter to the instinct to hit the brakes.

It takes practice on a closed course or in a realistic driving simulator to train yourself to use techniques like these properly.  Regardless, human reaction time is slower than a computer’s and some skids are unrecoverable without electronic help.

The systems listed above interfere with dyno testing because on a dyno the car’s sensors will detect that the wheels are spinning while the car isn’t moving.  This is usually a bad thing if you’re on a public road.  Automatic emergency braking would also interfere if you’re in a garage area at a dyno facility and the wheels are spinning at a high speed while your car is only a few feet away from a wall, so it needs to be turned off for dyno testing.

In limited circumstances, for a highly-experienced driver on a closed course or racetrack, there can be performance benefits to turning off traction and stability control.  But this is only the case for drivers with a performance driving background (no, taking your car to the drag strip once doesn’t count), and only when seeking to shave tenths of a second off of your lap times.

If you want a mode that will actually make your car go faster on a track, use Tesla’s Track Mode, which is available on the Model 3 Performance.  This recalibrates the car’s traction and stability control systems to be more focused on performance rather than safety.  It has been tuned by professional racing drivers to give you optimal control over the vehicle in a track situation.

Other methods have been found to defeat Tesla safety systems before, but these were more complicated than enabling dyno mode.  Dyno mode was a secret in software until the information got out recently.

Electrek will not reproduce how to activate the mode here so as not to encourage people to use it, and we won’t link to instructions on how to do so even though we know our readers are smart enough to find them.  We do this because we want to reiterate that you should not use dyno mode.  Those safety systems exist for good reason and you do not gain benefits from turning them off.

What we will do is show you a video of exactly why this is a bad idea.  One owner recently posted a video of himself activating it in a relatively normal scenario, a lightly curving freeway onramp.  He has a dual motor non-performance Tesla, which is less powerful and less susceptible to oversteer (respectively) than a performance or a rear-wheel-drive Tesla.  Yet he still was “very surprised!” by how easy it was to spin out on an onramp with dyno mode turned on:

This did damage to his car and to someone else’s property and had there been any other cars or people around, they could have been hurt.  All for a relatively innocuous stunt accelerating onto a freeway.

Other comments have cropped up of drivers who have managed to damage their cars, breaking wheels or suspension arms on curbs, and so on.  These can be expensive fixes and part availability is still not stellar so you’ll probably be off the road for a while.

Some videos have been made by Tesla YouTubers on closed courses.  One found that the system offered no performance benefits for drag racing, one showed that it’s extremely easy to lose control even under minor acceleration or deceleration on an icy surface with dyno mode turned on.  All of them said not to do this, and reminded owners that it is really only for use on a dynamometer.

I know I’m sounding like a spoilsport here but really, there’s no fun to be had by doing this on public roads.  I am all for fun driving and in fact prefer rear-wheel-drive cars specifically because it’s possible to get “tail-happy” and oversteer a little while driving.  But that’s fun on a track or other closed course, or in racing simulators.  Not on public roads where you can hurt yourself or others.

Even in an empty parking lot, this can still be dangerous.  Unless you are experienced at drift driving, if there are any curbs or walls nearby, you could lose control of your car and hit them.  You will be held liable for any damage caused and your insurance will do all they can to not cover it if they find you were being reckless.  At the very least, you’ll make a bunch of smelly tire smoke and kick up a bunch of rubber particles into the air around you, you’ll leave skid marks, you’ll ruin your tires and need to buy new ones sooner.

If you’ve ever tried driving in a realistic driving/racing simulator with driver aids turned off, you’ll know how easy it is to cause a spin, particularly in a powerful car (and I’d recommend this for any driver, by the way – but the more realistic simulators, not just arcade games).  Even people who think they are very good drivers will have this experience early on and think the simulator is being unfair.  It’s not unfair – we’re just all worse drivers than we think we are.

Remember: Teslas are powerful vehicles with extremely responsive, torquey motors that produce peak torque even at zero rpm.  Without these safety features, it can be extremely easy to lose control of your car.  That’s why these features exist.  Even people who are experienced at driving lower-performance cars without these safety systems (e.g. old vehicles) can be surprised when driving a higher-performance car without them.

I hope that I’ve made the case well enough here.  Unless you are on a dynamometer, or are a professional driver or on a closed course where you can’t possibly run into anything or anyone else, don’t be an idiot.  Do not activate dyno mode.