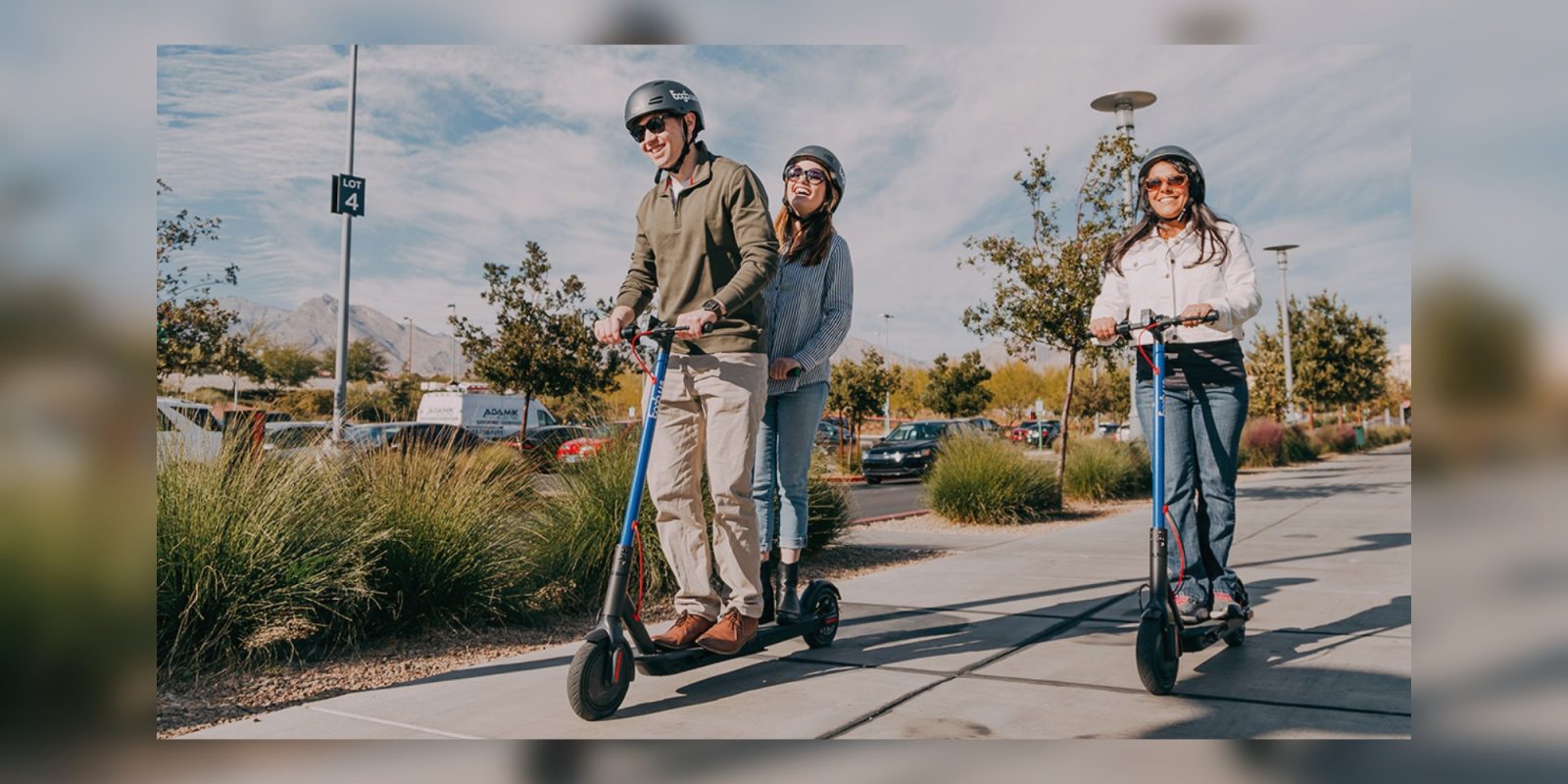 What would happen if you stretched a standard electric scooter to nearly twice its normal length and added a second handlebar? You’d get the BOGO two-person electric scooter, apparently.

The new dockless shared electric scooter startup wants to challenge industry heavyweights like Bird and Lime with a bold proposition: a scooter for two.

Shared electric scooters like those from startup BOGO have become ubiquitous in cities across the US and much of the world.

While studies have shown that most Americans are in favor of the convenient little micromobility solutions, that hasn’t stopped the electric scooter injuries from piling up.

While the scooters can be ridden safely, a combination of inexperienced riders and irresponsible riding behaviors has contributed to a rash of scooter crashes. One of the most common misuses of electric scooters is riding with a passenger. The already cramped foot deck and twitchy nature of small-wheeled scooters make this a recipe for disaster.

That was the impetus for BOGO’s idea to create a patented electric scooter that was purpose-designed to carry two riders. 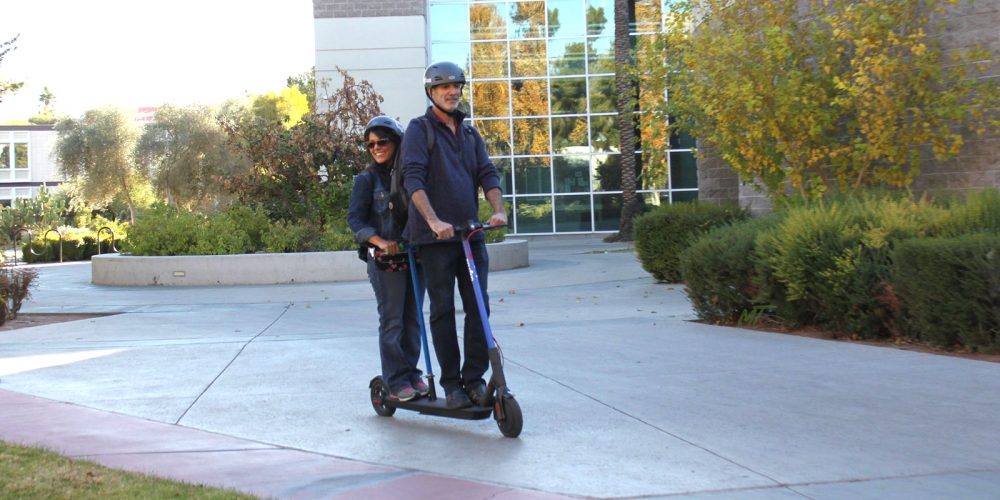 “The idea resulted from seeing several injuries and accidents caused by two people riding together on a standard single rider electric scooter with only one handlebar.”

BOGO’s solution? Stretch that scooter out and add a second handlebar. 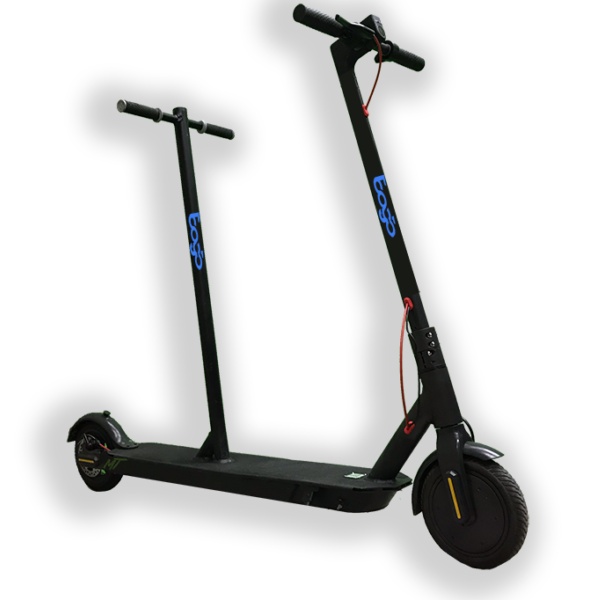 According to the company, this makes the scooter safer to ride with a passenger:

“Having two people ride together on a single scooter with only one handlebar changes the balancing and weight distribution of the riders making it extremely dangerous. Additionally, younger riders who do not possess a drivers license or are unable to ride a scooter on their own, can now enjoy being driven on the back of a BOGO scooter.”

The stretched deck also adds more room for batteries, allowing the electric scooters to roam the streets longer before needing to be collected for charging.

BOGO claims that they manufacture their two-person scooters (and the smaller one-person scooters that they also plan to offer) in the U.S. at their Nevada facility. The company intends to roll out operations in the next few weeks, starting with select cities in California and Nevada.

Rentals will cost $1 to start and 15 cents per minute – the same pricing structure as most other electric scooter rental companies. BOGO hopes that pairs of riders will choose to save money by renting one two-person scooter for the same price as competitors’ single-rider scooters. 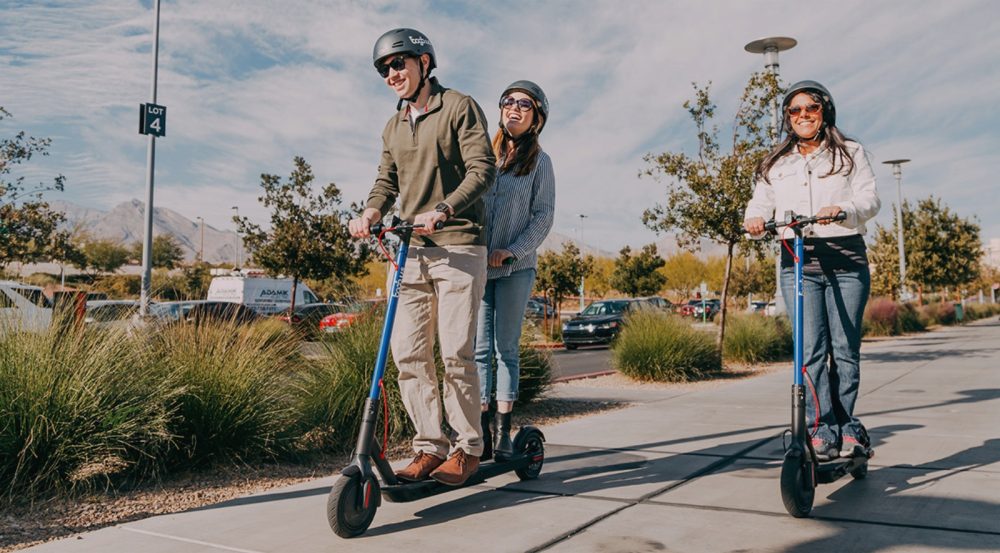 I’m sorry, but this looks dangerous to me. And I’m probably more pro-micromobility solutions than most people out there.

Here’s the issue. Yes, a second handlebar gives the passenger the ability to lean with the first rider (operator?) instead of hanging on like dead weight. However, that assumes the passenger knows to do this and actually does it. The reason a rider feels comfortable leaning into turns is because he or she is in control of the steering and the subconscious portion of the brain is constantly correcting both the handlebar steering inputs and the body’s lean angle for maximum stability. Well, at least in riders with a decent level of coordination.

But when you’ve got a meat sack on the back of the scooter with minimal visual input and zero steering input, the brain is a lot less likely to make the body lean at the correct angle at each moment of the turn. Add in the fact that the weight is now further back on the scooter and feels a lot different to the first rider than the standard scooter he or she is used to riding and you end up with a situation called “speed wobbles”. This is where oscillations begin in the scooter’s steering and grow larger if not mitigated by a skilled rider. Except now when you crash, you’ve got your girlfriend, wife or kid on the back. Cool. 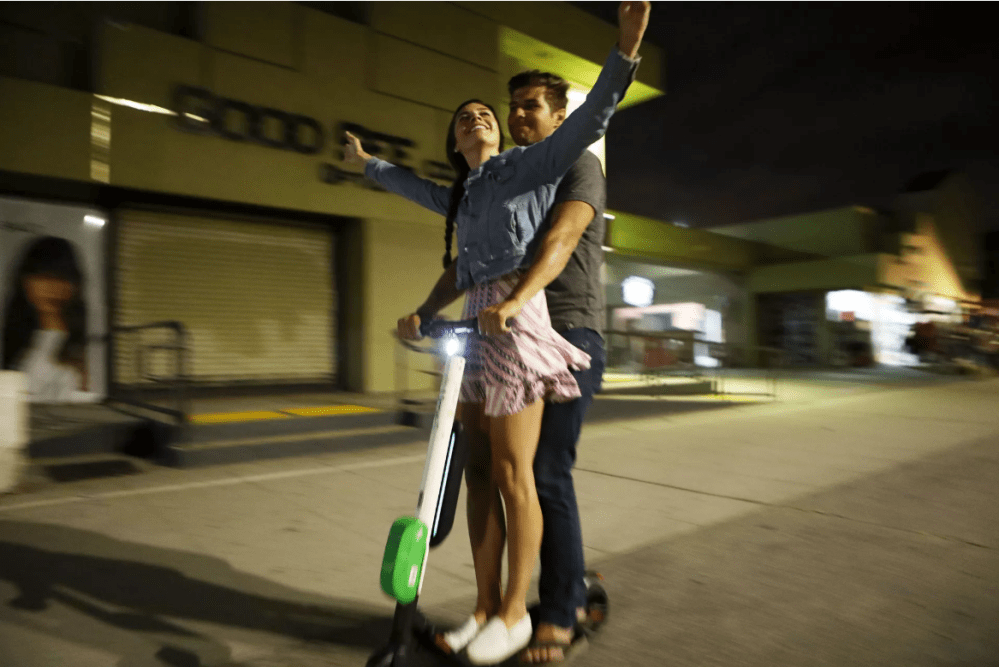 To be clear, I do believe BOGO’s two-person scooters are probably safer than two people riding a Lime scooter. But despite it being safer, I still don’t see it as safe.

While the idea might be fine on wide open paths at low speeds under 10 mph (16 km/h), something tells me we’re going to see two big college dudes barreling down a pedestrian-packed sidewalk in a 400+ lb wobbling electric scooter congo line from hell.

Also, I want to know more about this U.S. manufacturing. The scooter is obviously a Xiaomi M365 electric scooter clone that has been stretched. Unless BOGO licensed the design, reverse engineered it, or bought another clone’s rights, that U.S. manufacturing seems dubious. And that’s before you consider that essentially zero of the parts used in these scooters are manufactured in the U.S. They come almost entirely from China.

So could BOGO have built the first electric scooter manufacturing facility for Xiaomi electric scooters in the U.S.? Perhaps. But that’d be quite an undertaking for a new startup entering late in the e-scooter game.

What do you think? Will you be riding this electric scooter limousine to prom next year or taking your kid to school on a BOGO two-person electric scooter? Let us know in the comments below!