Tesla has made a pricing change to its Model 3 Performance vehicle by including the previously $5,000 Performance Upgrades Package free.

The move arguably devalues the Performance Model 3s already on the streets for thousands of early buyers who had been long-time reservation holders, though the price no longer includes free supercharging.

In August, Tesla started deliveries of the new Model 3 Performance.

The vehicle could be ordered for $69,000, but Tesla quickly changed the base price to $64,000 and unbundled some features to offer a $5,000 Performance Upgrades Package.

Today, the company updated the Model 3 online design studio to make the package standard with the Model 3 Performance: 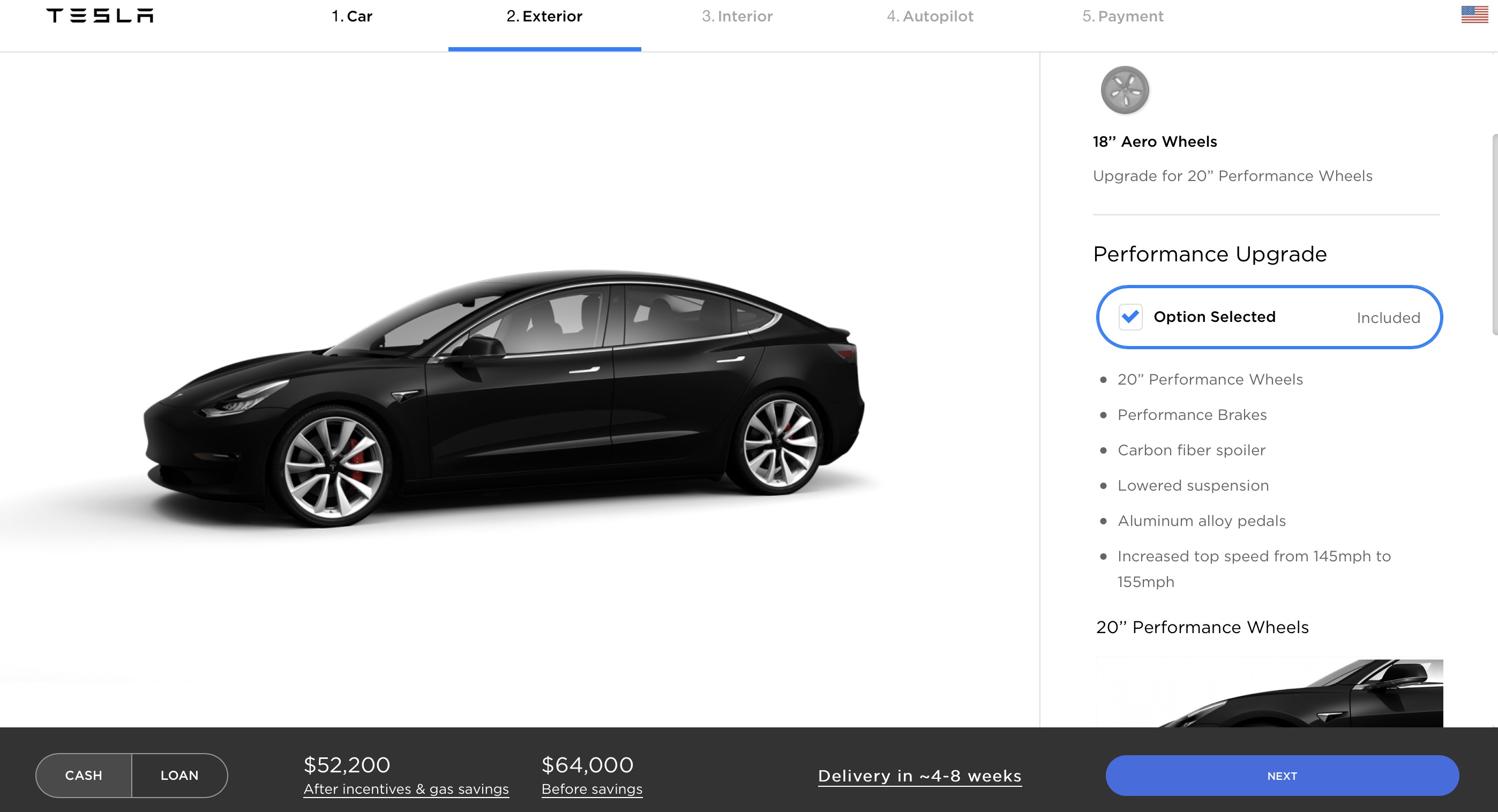 Tesla didn’t change the $64,000 base price of the Model 3 Performance – virtually including the package for free.

We asked Tesla about the change and a spokesperson gave us the boilerplate design studio update answer:

“We periodically adjust available options and packages in order to simplify our product offering and deliver the best possible driving experience to customers.”

They said that they will adjust the price for the vehicles on order, but buyers who took delivery before today are out-of-luck.

The automaker is still guiding ~4 to 8 weeks for a delivery of a new Model 3 Performance.

Update: Elon Musk confirmed that they will reimburse previous Model 3 Performance buyers with the difference if they choose to give up free lifetime Supercharging:

It was underpriced. Anyway, if you want $5k refund & free Supercharging turned off, we will do that.

Obviously, I am extremely biased here because I have a Model 3 Performance with a Performance Upgrades Package which I purchased for $5000 more, but I think most people agree that this is an ill-advised thing to do.

In hindsight, it looks like Tesla solely created that $5,000 package to upcharge early buyers knowing that there will be plenty of demand for the vehicle at the launch due to the reservation holders waiting for the performance version.

This theoretically enabled them to deliver higher gross margins in Q3 and a profit. It feels like that now Q3 is over, Tesla is getting rid of the package and going back to the planned price structure to get the real demand for the car.

I have been waiting over 2 years for the car and I love it, but now I feel cheated by Tesla because I could have saved $5,000 by waiting two more months to get it and I wouldn’t have had to loan Tesla $1,000 interest-free for 2 years.

Tesla has always made it clear that it planned on making the most expensive versions of the Model 3 first in order to be profitable during the ramp, which it achieved last quarter. I get that.

That said, early buyers would get more premium features in return, like the Long Range battery pack, the premium interior package, etc.

But we’re not talking about a car getting an update or a price change after a year here. We are talking about a vehicle that has only been in production for 2 months and Tesla is just changing the pricing structure fairly significantly.

That change is therefore penalizing early buyers who have been long-time reservation holders.

Tesla has had some weird price changes in the past, but this one seems to be one of the most ill-advised.

For a while now, I’ve said that the reservation process for the Model 3 didn’t add much value for most reservation holders. Though this move proved that for those waiting for the Performance version, it was actually detrimental.

While it’s disappointing for us, it’s certainly good news for new buyers.

But let’s not kid ourselves. Tesla didn’t reduce the price of 20″ wheel upgrade, lower suspension, and a spoiler by 100% through production efficiencies in 60 days?

I can’t square this in any other way except to feel that Tesla used the package to take a much higher margin on the car during the last quarter and now they are changing it back after achieving profitability.

Update: I am truly disappointed by the type of reactions I got from Tesla fans over this. You can love what a company is trying to do and still recognize when they do something wrong.

The company clearly did the wrong move here and Elon even admitted that the criticism is “reasonable” and they are taking corrective action:

It’s a reasonable criticism. We wanted to make the awesome version of Model 3 Performance more affordable, but it was arguably too much too soon. Taking corrective action …

They are offering to reimburse the $5,000 difference.

It’s crazy the amount of hate I got just for calling them out on this.