A local Chevy dealer dropped off the Volt this afternoon and after a brief run through, it was all mine. It is always interesting to see how long the delivery guy takes to realize that I know more than him about the car that it is his job to know about.

Our delivery guy packed it up and went after I showed him the garage full of EV chargers and asked some in-depth questions about the Voltec powertrain/engine. “He’ll get back to us on that.”

The car is a very good-looking bright blue that I happen to love. The car still smells new on the inside and it feels like something right off the auto lot. I love my job.

As a background, I’ve test driven the Volt a few times. We were looking for a family car in 2012 and were pretty close to picking up the 2012 model but then Tesla started selling their 40kWh Model S for a $50,000, a less than $10,000 premium over our configured Volt.  The previous year we picked up a Plug-in Prius (huge mistake) over the similarly-priced Volt. The clincher in that case was the very cramped back seat.

Chevy has all but eliminated the rear seat issue with the new Volt by raising the seats and lowering the T battery configuration. The Volt will now seat 5 with the unlucky 5th person straddling the battery in the back seat. For my small family, this is probably the biggest improvement to speak of. The Volt also looks more like a normal car. Chevy put shiny chrome accents on the front grill to show that this is no ordinary ICE car – though the Volt will still need air intake to fill that gas engine after you go 53 miles on electricity. 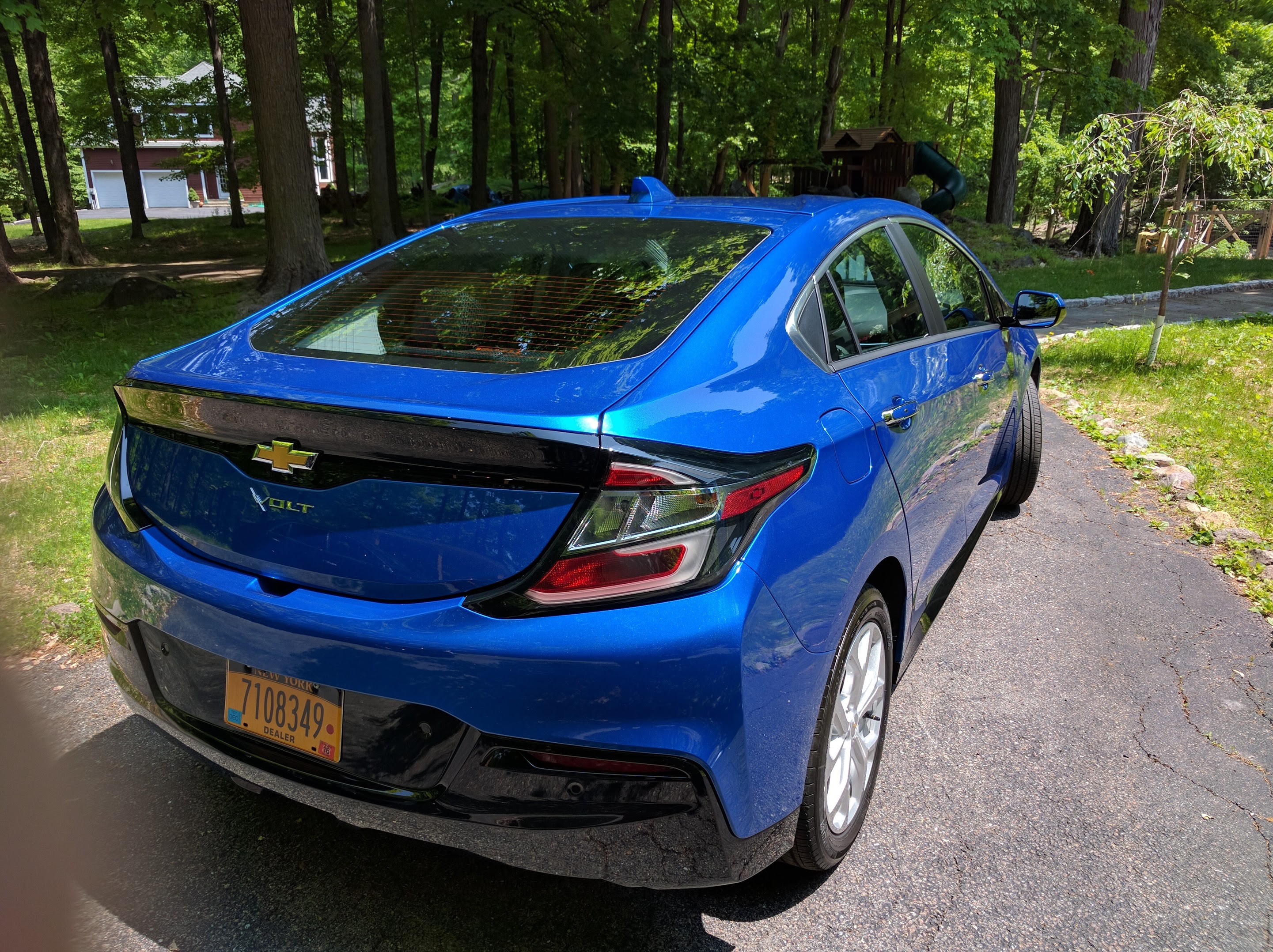 After the Chevy folks left, I took it for a spin around the neighborhood to make sure everything was working properly. It clearly wasn’t as speedy as my Tesla but certainly no slouch like the Prius either. It handles incredibly well for a Chevy and has a really nice Bose surround stereo speaker package. The center console screen, again, wasn’t close to the Tesla but probably the best I’ve seen otherwise. It is about the size of an iPad Mini and has excellent clarity and great blacks. I look forward to setting up CarPlay and Android Auto tomorrow.

The steering is tight, the suspension is comfortable and the acceleration (7 second 0-60) is fun. I got it up to 85 on the highway easily and it had no shaking or rattling issues at speed. At no time did the ICE engine kick in either. 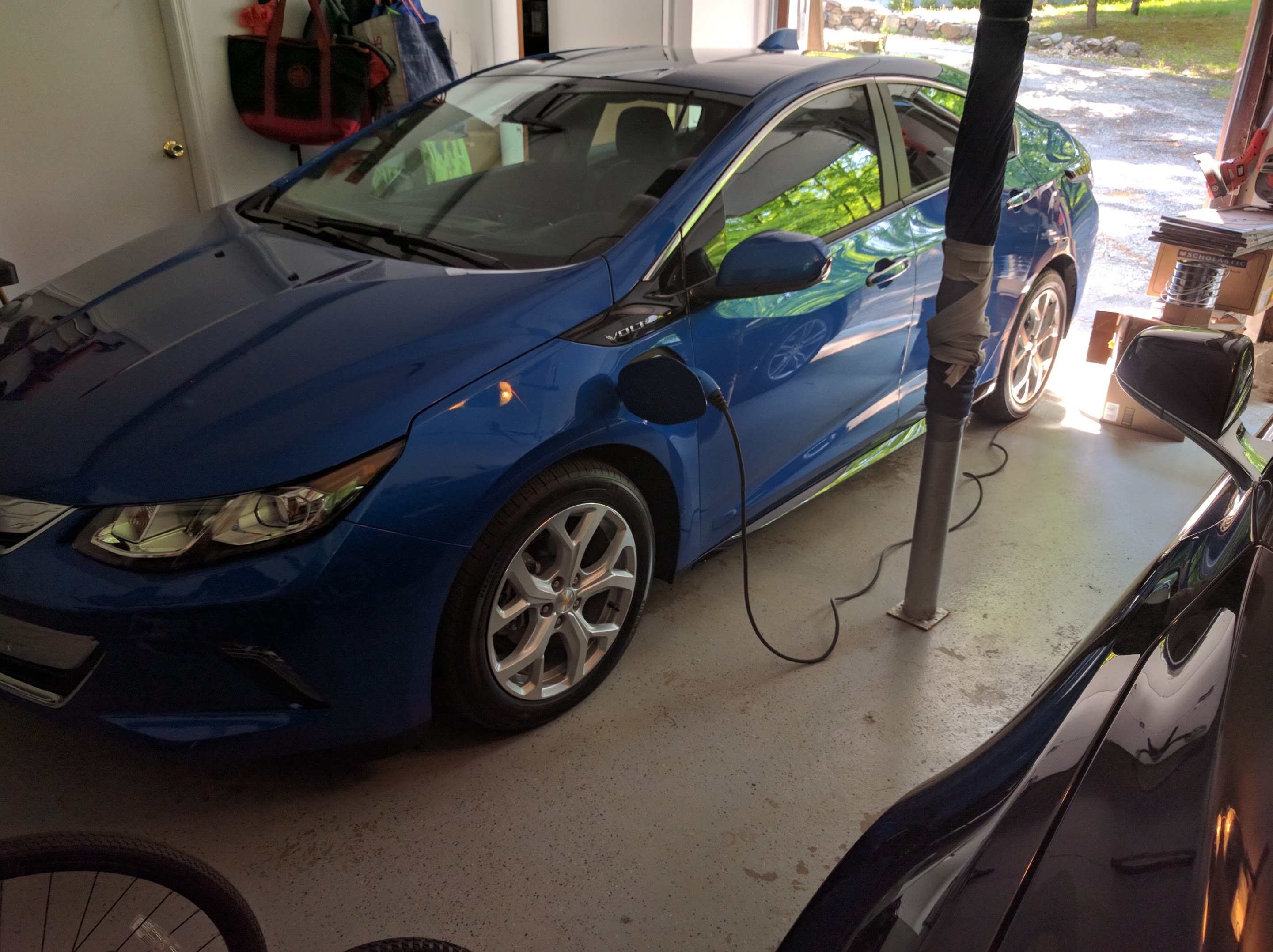 After a few minutes on the road, I dropped it back into the garage where the plug-in Prius lives. Since the charging cable is on the other side, I had to wrap around the Aerovironment TurboCord which thankfully easily made the reach. When you plug in, the green light on the dash lets you know you are charging.

The Volt only does AC charging and only goes at normal 115V speeds with its included charger. If you have something like the Aerovironment Turbocord or better, you can charge the Volt from empty in a little over 4 hours. On normal 110, it will take all night – which is fine by most use cases. 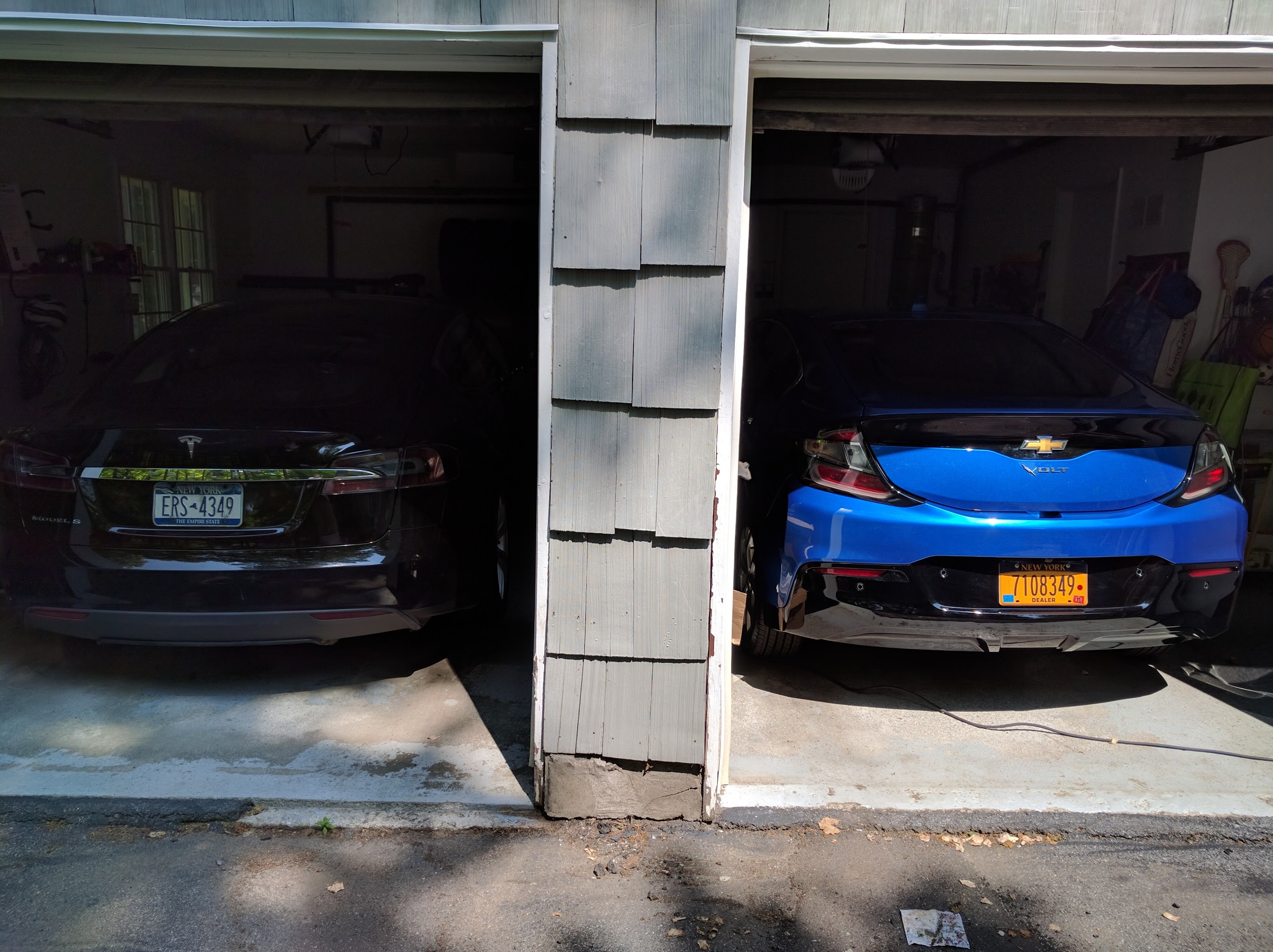