I think we are witnessing the start of a new (but long overdue) trend this year. The few established automakers still pushing fuel cell hydrogen vehicles appear to be warming up to battery-powered electric vehicles instead. Honda, Toyota and Hyundai, arguably the automakers most stuck on hydrogen, all announced new electric vehicle programs in the past few weeks.

Toyota is working on a plug-in version of the Corolla. Hyundai is bringing its Ioniq electric platform to market by the end of the year and this morning, we reported on the Korea-based automaker developing a next generation battery-powered electric SUV.

Those two automakers are arguably the most entrenched in fuel cell technology with the Toyota Mirai, the Hyundai Tuscon Fuel Cell, and billions spent in investments between the two of them, but the most telling news is that Honda, another fuel cell believer, is planning to launch a battery-powered version of the Clarity, a car it actually developed for its fuel cell program.

Again, this transition is long overdue. For most people, the physics of fuel cell vehicles make little sense compared to battery-powered vehicles. The complex powertrain featured above should be enough to drive people away from the technology, but a more simple demonstration of the inefficiency of fuel cell versus electric vehicle is evident when comparing cycles: 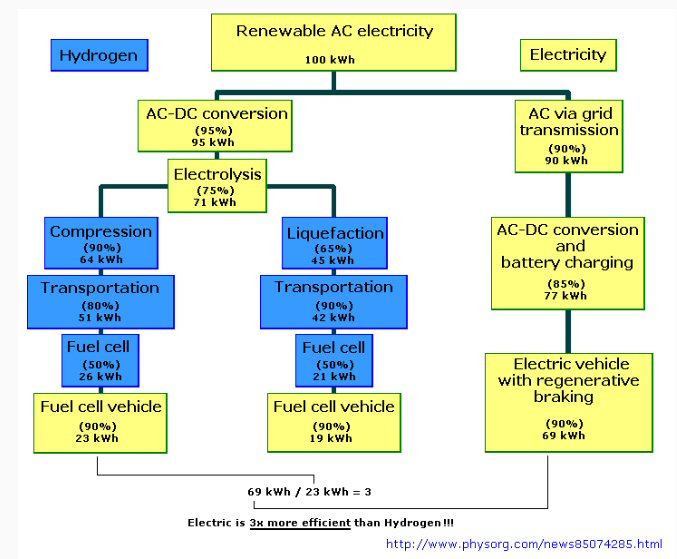 In most cases, a battery-powered vehicle is almost 3 times more efficient. One can only presume why automakers have been stuck trying to make it happen anyway, but the technology conveniently needs a similar (and profitable) refinery and refuelling supply chain as the gasoline model. Could that be it?

The only real advantage fuel cells *currently* have over batteries is refueling speed which is quickly being closed by Tesla’s Supercharger and other DC fast charging technology.

The automakers who are pushing fuel cell are also primarily located in Japan and Korea where governments are offering subsidies for the vehicles and financing for the required infrastructures. These incentives extended to the US where in California, the latest version of the Clean Vehicle Rebate Program offers bigger incentives to fuel cell cars than to electric vehicle.

Though CARB’s logic for the favoritism is that no one is buying fuel cell cars anyway, so even with bigger incentives per vehicle, they will still spend less money than on popular electric vehicles.

The transition isn’t all bad for fuel cell automobile manufacturers. The work they’ve done and the vehicles they’ve created are still essentially electric cars but with a different (and inferior) storage and fueling system. That means switching to battery EVs will be much easier than starting from scratch.

I think we are going to slowly see these programs disappear, while automakers, like Honda, Toyota and Hyundai, will quietly let their fuel cell programs die and start investing more heavily in electric vehicles. Like they should have years ago.