Navigant Research published its latest leaderboard report on li-ion batteries for transportation and the firm sees LG Chem as the leading supplier. Panasonic and Samsung SDI are also considered “leaders” and not far behind LG according to Navigant.

Panasonic is Tesla’s main supplier of battery cells, but the automaker recently inked a deal with LG Chem to supply battery cells for the new Roadster 3.0 battery pack upgrade. Tesla is also reportedly in talks with Samsung for another battery supply agreement. 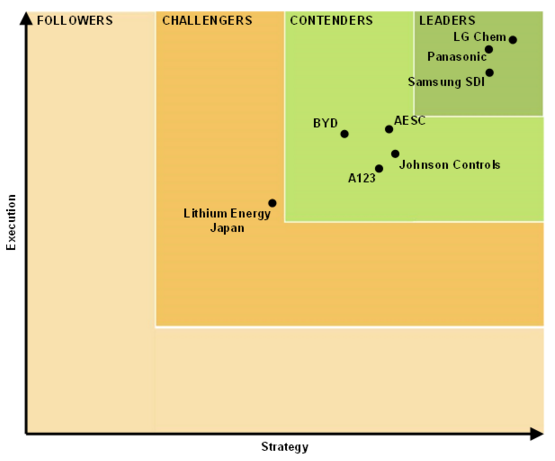 Navigant predicts that the global market for Li-ion batteries will grow at a compound annual growth rate (CAGR) of 31.9% between 2015 and 2020. The firm expects the total energy capacity to reach 61.3 GWh by 2020. On the other hand, Tesla alone expects its Gigafactory to reach 35 GWh of battery cell production and 50 GWh of battery pack production by 2020, but some of the capacity will be for stationary energy storage and not transportation.

We recently learned that the Gigafactory will be 40% larger than originally expected, but Tesla didn’t update the production output.