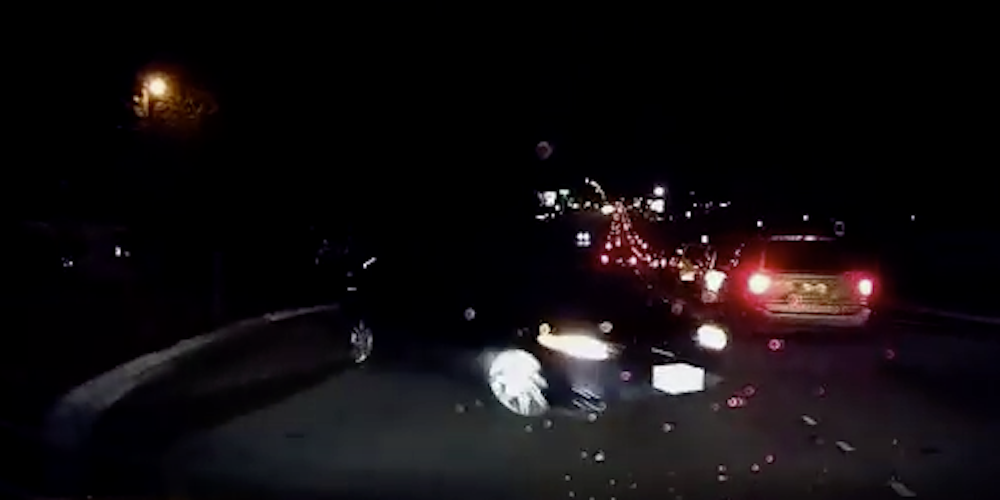 A Tesla driver (note reflection of Model S screen in video) says that Autopilot saved him from a head on collision with a turning motorist on a dark rainy night in Seattle. Reddit user Jhall118 took to the forum to discuss what happened in the video below…

I disagree [that I should have been driving slower]. This was on Highway 99 north of Seattle. I set it a couple mph below the speed limit of 45. Traffic tends to move around 55. It’s easy to say that in hindsigh, I should be going slower, but traffic tends not to pull out from you in that direction. I was actually watching cars to the right of me, which is the entire reason the car reacted and I didn’t. All the fault is in the other driver, and the video clearly shows this. With your reasoning, even going 25 in a 45 is too fast, because someone could pull right in front of me.

Also, I had the car set to follow cars at the maximum distance, which has ironically is about 2 to 3 vehicles in front (It’s based on speed).

Did collision alert chimes go off? Yes. I wasn’t recording audio at the time because I had just dropped off a passenger (I drive Uber in the mornings before work). Too bad. I screamed, honked, and yelled.

A close call to be sure. I can already see Autopilot and Driver Assistance saving accidents and lives (and money in hospital bills).

The release of the Autopilot attracted a lot of attention for enabling hands-free highway driving, although Tesla recommends keeping your hands on the steering wheel, but the company also released ‘Automatic Emergency Steering’ and improved on the ‘Automatic Emergency Braking’ system with the same software release.

Those are very important features and what we see in action in the video. Another slightly less harrowing video from a Tesla owner in Moscow below