In a recent interview with AutoExpress, Tesla VP of Engineering Chris Porritt (formerly of Aston Martin) strongly hinted that the highly anticipated Tesla Model 3 will be part of a vehicle platform that may ultimately comprise a few varied designs.

Tesla has revealed that its new BMW 3 Series rival, the Tesla Model 3, will spawn a number of derivatives that could include an SUV and an estate in order to attract a broader spread of customers.

From a strategic standpoint, this makes a load of sense. Indeed, Tesla is already implementing this strategy with the Model X which is based on the same platform as the highly revered Model S.

Lending more weight to Porrit’s statements, check out the following slide taken from a recent presentation given by Tesla CTO, and all-around battery guru, JB Straubel. 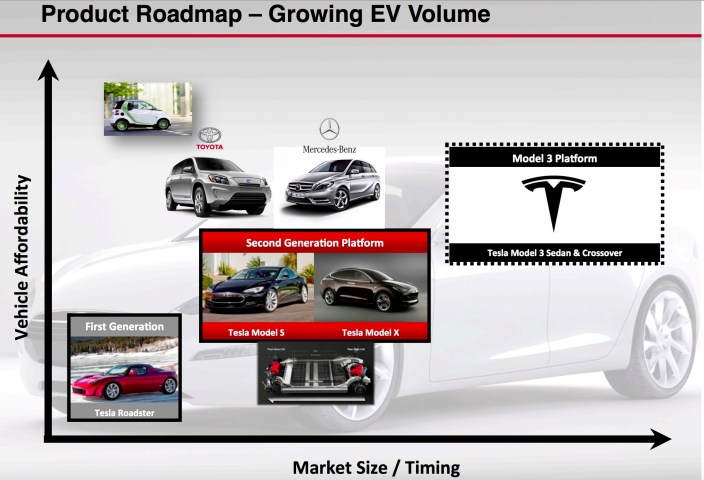 Right there in black and white, the Model 3 platform will include a Sedan and likely a crossover vehicle down the line.

Again, this is a shrewd strategy that shouldn’t come as a surprise to anyone. There’s no denying that the Model S is a certified hit, and if pre-orders are any indication, Tesla will be selling Model X vehicles as fast they come off the production line. Still, for electric vehicles to truly gain mainstream traction, Tesla will not only need to release a more affordable car (which is the plan), but they’ll also have to have models that can appeal to the varied tastes of the masses.

On this note, Porritt adds:

We don’t know what type of customer we’re trying to appeal to yet, but we want to speak to more customers… Lots of them! We’ve got specific customers for Model S, we have an idea with Model X, but we need to appeal to more people with Model III.

Looking ahead, the impeccable and elegant design of the Model will certainly serve to raise expectations for the Model 3, a car which Tesla chief designer Franz von Holzhausen previously explained would be “more expressive” and have more of a “couture” look than the Model S.

On the materials side of the equation, Porritt noted earlier this summer that the Model 3 won’t rely as much on aluminum as the Model S, explaining that Tesla has to be more cost conscious to truly make the Model 3 widely affordable.

The plans to introduce a Model 3 Crossover may have also cut the Toyota RAV4 EV program short. The program was abruptly stopped a few months ago with Musk noting that future plans with Toyota weren’t out of the question.